We know that the greatest thing about our products or our services will be a hit, it is just a matter of getting the word out.
This has been the principle of advertising for centuries. What was soon learned though was that it isn’t just a case of taking a product and telling everyone it exists, we need to explain its virtues, make it look desirable and often create an aura around it, just to make sure that people don’t just know about it – they NEED it.

Marketing has long been a derided tool, because it does exactly that – it enhances and often embellishes the benefits of a product to make it attractive. The Marlboro Man is a great example – put forward as a role model of masculinity, that campaign idea set the tone for driving image based advertising without ever mentioning what it was on offer as such.

At the same time, there have been some ingenious marketing, branding and advertising ideas come along that have been honest, joyous and frankly, bloody brilliant.
‘Diamonds are forever’ is not a tradition, it is a marketing campaign, invented in 1938 by N.W. Ayer & Son and literally CREATED the association between diamonds and marriage.
‘Think Small’ pushed out the VW Beetle as cute, sensible and stylish – which it was. It just needed to be sold honestly to be successful, but this campaign was a huge risk at the time. 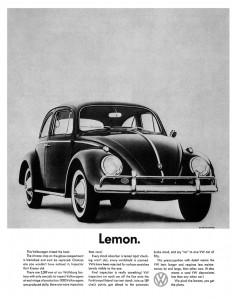 Apple has been so successful at both branding AND marketing over the past 20 years that it has become the very definition of style and desirability in every market it touches (imagine being asked to come up with a more stylish iPhone?).
Likewise, promotions, events, billboards, publicity stunts and endorsements have all been leveraged in a million different ways to create both awareness and consumer demand for products.
I constantly work on ideas, concepts, tag lines and find some ideas to be hugely rewarding and beneficial to the client, while on other projects, no idea seems originally and cool enough, so i head back to the drawing board.
This article has been prepared to kick off a discussion – either in your office, over drinks, in your own mind and hopefully through comments on this post and on our facebook page. What have been your best creative ideas and successes in business? Needn’t be marketing, could be a process change, a management tactic or a new company activity. How did it come about? Did it meet with resistance?
Likewise, i hope to hear about some of the current challenges you face, and inspire some new ideas. Republik is here to help flesh them out if you need us!

Want to join the discussion?
Feel free to contribute!